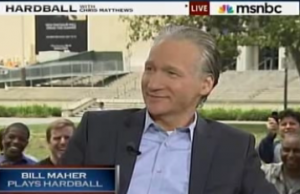 Bill Maher appeared with Chris Matthews today and virtually no Republican was safe from Maher’s comedic insults. With plenty of ground to cover, Maher stuck around for two segments and took aim at everyone from Governor Lard (New Jersey Governor Chris Christie) to the Professor of Idiocy (Newt Gingrich).

Maher was sad to see Donald Trump and Mike Huckabee leave as candidates because Trump’s ego needed the White House and since there were so many more comedic opportunities possible. Now Maher guesses the Republicans will nominate an “empty suit” like Tim Pawlenty for the top of the ticket and most likely a “frothing loon” like Michele Bachmann to be his running mate. Yet Maher continues to be amazed how Republican candidates have to say the craziest things to win the Iowa primary and then spend the rest of their campaign trying to backpedal from such nonsense.

In the next segment, Maher didn’t seem too troubled by Arnold Schwarzenegger’s love child, since unlike the IMF Chief who is charged with sexual assault, at least Arnold got a “yes” first before he went after the household help. Instead, he suggested America is a “childish country” for spending so much time obsessing over sex scandals when they have no relation, in Maher’s opinion, to a politician’s effectiveness in doing his job.

Returning to Newt, Maher wanted to let everyone in on a secret about Newt that not many people want to say publicly: “he’s ugly inside” and “he’s ugly [on the] outside.” Matthews got in on the “fun” too, suggesting that although he thinks Newt might be the devil, he’s probably wrong since Newt already looks like the devil and the devil would probably want to be better disguised. Overall, Maher isn’t worried about Obama’s re-election, not only because the competition is weak, but because Obama finally won over middle America and the white people by successfully shooting someone in the face.