Bill Maher And Herman Cain Hit It Off: ‘I Don’t Agree With A Word You Say, But I Like You!’
video

Bill Maher And Herman Cain Hit It Off: ‘I Don’t Agree With A Word You Say, But I Like You!’ 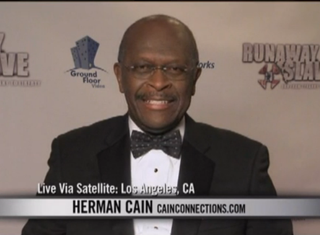 Chalk this one up to a case of “opposites attract,” or perhaps things can be so vastly different that they circle back around to being near identical. Bill Maher had former Republican Presidential candidate Herman Cain on his program last night, and not only did the candidate not say “999” or quote Pokémon (that we know of), the two laughed and chatted like old friends. Maybe the world won’t end in 2012 after all.

RELATED: Bill Maher Defends Ron Paul: ‘[He Is] In My Heart On Foreign Affairs, Not Barack Obama’

“I haven’t seen you with a bow tie– you haven’t joined the Farrakhans have you?” Maher joked by way of introduction. Cain joked that he wouldn’t be allowed in the Farrakhans because of the dots on his tie, and the two got down to business. “Too many people are hung up on whether you are Democrat, Republican, conservative, liberal… I would make fun of those labels– American needs not to be so uptight about everything!” If you’re having trouble figuring out who said that, it was Herman Cain, but Maher agreed 100%. This, for the most part, was the tenor of the conversation.

“I noticed you are standing in front of a billboard that says ‘Runaway Slave,'” Maher noted, to which the crowd laughed uproariously. Cain explained that he was at a movie premiere for a film about big government. “Slavery is being enslaved in your mind and believing that the government is the answer to your future and your issues,” Cain argued, which Maher didn’t seem to agree with, but he had more important things to ask about, like Romney’s victory: “Does it bother you that the least black candidate won?”

“I’m not about color– I’m about solutions,” Cain replied, continuing to argue that the job creators were being hampered. “I don’t agree with a word you say, but I like you a lot, I really do!” Maher replied, not bothering to get into the substance of the response. “You’re one of those people, like Reagan.” But Maher did press him on one comment that really bothered him– the “I’m a leader, not a reader” quip.” “Is it good to attack readers when you’re trying to sell a book? Why are these things mutually exclusive? Is your party anti-intellectual?” he asked. Cain replied that he was not going to attempt to defend his entire party, but that most who attacked him on that front were nitpicking.

Then there was one more order of business: Mark Block‘s “smoking man” ad. “What was that about?” A confused Maher asked. “We had a saying… let Herman by Herman, let Mark be Mark, and let people be people.”

No 999, no Pokémon, but at least one “Let Mark Block by Mark Block,” for old times sake.

The wonderful conversation via HBO below: