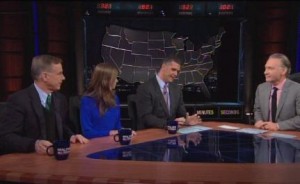 Bill Maher opened the panel discussion on his show tonight talking about President Obama‘s inaugural address. Maher admitted that it was a strikingly partisan speech, but felt it was warranted given how much Obama has tried to reach out to Republicans and failed. Maher and panelist Howard Dean clashed with the two Republican panelists over how much Obama has done to work with Republicans and how much the GOP is obsessed with ridiculous controversies and conspiracies.

GOPAC president David Avella allowed that Obama did some reaching out in his inaugural, but considered his language about civil discourse to be hollow given how he has personally insulted Republicans. Maher pushed Avella to explain exactly how Obama has insulted the opposition, to which Avella said that Obama has referred to his opponents as “right-wing Republicans.” Republican pollster Kristen Soltis thought that Obama’s speech seemed to hammer home the same “you didn’t built that” theme the Republicans jumped on him for last year.

Dean dissented, saying the clear theme of the speech was equal rights, and praised Obama for standing up “against all this crazy crap on the right wing.” Maher used this as a jumping-off point to bring the conversation to how big a deal the Republicans have made about the attacks on the U.S. consulate in Benghazi last September. Maher said that the GOP is going down the rabbit hole when no one actually cares about the scandal.

Maher found it remarkable that Republican senators were actually “screaming” at Hillary Clinton during her testimony earlier this week. Soltis pointed out that it was no better than Democrats fawning over Clinton. Maher continued on the “crazy crap” train with a clip of Senator Rand Paul going after Clinton on something Maher said he clearly based on “horseshit” he heard on TV, which explains Clinton’s bewildered reaction to his question.

Maher marveled at how Republicans appear to be making a bigger deal over Benghazi than over 9/11. Amidst some talk about crazy conspiracies over the Sandy Hook shooting, Avella and Dean squared off over which political party has more insane conspiracists. Dean said the GOP is blatantly trying to “undermine democracy” by changing election laws in order to help them win in the future, and said the country should be talking about issues beyond the simple social differences on abortion and guns.