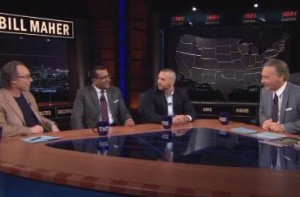 Bill Maher and panelists took on the controversial drone strike Justice Department memo released this week. Maher admitted he does not seriously have a problem with the United States raining hellfire on terrorists, but he said that the policy proves that while most people would like to believe President Obama is a big shift from George W. Bush, they basically share a similar foreign policy outlook.

Maher summed up the drone policy as “we will fry anyone in the world with our flying killer robots because someone we know wrote it down on a piece of paper, and therefore it’s legal.” He clarified that he’s not completely against this line of thinking, but in spite of the fact that Obama is the “swell guy” and Bush was the “dumb oaf,” he said it’s essentially the same “we’re good, they’re bad” policy.

Lawrence Krauss admitted his strong concerns with the U.S. government having the power to be able to kill any American citizen based on some vague guidelines. Maher admitted that “in a world where there are nuts and nukes,” “there are no good choices” to take. Martin Bashir said no one disputes that the government shouldn’t be taking out legitimate targets, but people should be asking how they feel about the government having that kind of power in the future.

Bloomberg TV’s Josh Barro differed with Maher, saying that it’s not exactly the same as the Bush policy because drone strikes are not on par with invading other nations. Krauss maintained that the government should not have that power to begin with, asking how we would feel if other nations decided to exercise similar policies regarding the United States.