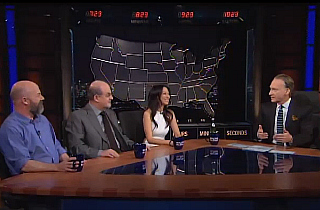 Bill Maher does not often have nice things to say about Republicans, but on this Friday’s edition of Real Time, he and his panel had nothing but praise for Sen. Rand Paul‘s attempt to distance himself from the warhawk-ish tendencies of his party.

Joined by Amy “Tiger Mom” Chua, famed blogger Andrew Sullivan, and author Salman Rushdie, Maher noted that most of the speakers at last week’s Conservative Political Action Conference (CPAC) were calling President Obama a “pussy” for not taking on the Russians in Crimea. By contrast, he said, Sen. Paul won the straw poll while being of the belief that America must not maintain an empire; and that America needn’t aggressively intervene abroad.

Sullivan agreed: “I think Rand Paul’s attempt to say what most people in this country really understand, which is that we don’t need to run the world. We don’t want to run the world. America would be in a better place if we were less interested in our own power, and more interested in freedom.” The audience applauded such a sentiment.

-RELATED: Memo to Cable News: Learn the Difference Between ‘Isolationism’ and ‘Non-Interventionism’

Rushdie asserted that if Hillary Clinton is the Democratic nominee in 2016, Rand Paul could stand a chance because he would have the youth vote behind him. “She’ll come off like a neocon,” Sullivan agreed. “In fact, she is a bit of a neocon.”

“And he’s so independent-minded,” Chua chimed in. “I think with Hillary Clinton, you feel like it’s just going to fit into certain familiar things. But he’s just a little unpredictable, you know, he doesn’t care what people think. That’s appealing to a lot of people.”