Bill Maher Asks Why Everything Is So Political These Days: We Can’t Even Agree On ‘What Is Reality’
video

Bill Maher Asks Why Everything Is So Political These Days: We Can’t Even Agree On ‘What Is Reality’

Maher: Everything Is So Political These Days: We Can't Even Agree On 'What Is Reality'
Twitter share button 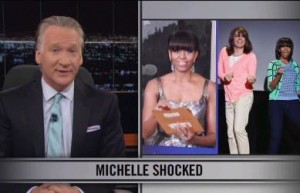 Bill Maher used his last New Rule of the night to bemoan how everything in the United States, from what products you buy to basic science, has become so overtly political. He found this particularly strange in a country where people supposedly hate politics, bringing this up in the context of conservatives reacting so negatively to Michelle Obama‘s frequent TV appearances. As Maher put it, “If seeing this nice lady on TV saying she likes the movies or nutrition or exercise fills you with rage, get help.”

RELATED: Michelle Obama Was ‘Absolutely Not’ Surprised By Reaction To Oscars Cameo: That’s Just ‘Where We Are’

Maher elaborated, “Since when does everything in America have to be political? It’s exhausting!” A corn dog is not just a fun snack, it’s a way to fire back at oppressive Obamacare. Gay marriage opponents eat at Chick-fil-A, and liberals always want to know where their meat comes from. Immediately disproving the notion, Maher mocked Whole Food labels telling customers where the meat is from by saying “you’re eating it, not going to its high school reunion.”

Maher cited studies showing there are now conservative and liberal preferences for beer and groceries. But he said the problem gets even deeper, pointing out that “‘I believe in science’ didn’t used to be fighting words.” Maher added that there are now political fights over the most basic of issues, like “getting raped is bad.”

Maher ended by referring back to President Obama‘s famous 2004 speech saying there is neither a liberal America or a conservative America, but a United States of America. Maher said that everyone knows that’s “bullshit,” because people no longer “believe in what is reality.”