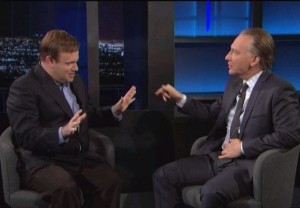 Bill Maher interviewed Republican pollster Frank Luntz on his show tonight to get his take on how President Obama and Mitt Romney did during this week’s debate. Luntz predicted that despite the president’s poor performance, Obama would still win reelection. However, Maher immediately switched topics to tell Luntz “it’s widely known that you’re evil.”

Maher explained that the “evil” tag was because of his ability to change words in order to get “stupid people to vote against their interests.” Luntz explained that he would have told Romney to use the phrase “hard-working taxpayers” as opposed to “middle class” or “middle income.” He told Maher that he sees people in his focus groups, “whether they’re Democrats or Americans,” burst out crying when candidates talk about economic hardships.

Maher brought up a line Romney used about “trickle-down government,” and Luntz defended Romney by citing statistics on not just unemployment, but underemployment. When Luntz congratulated Maher on getting his show renewed and suggested he vote for Republicans, Maher remarked that the difference between rich Republicans and real Democrats is that the latter votes against their economic interest for the benefit of the country.

Of course, one of the highlights of the debate was Romney’s line about PBS. Maher told Luntz that low-information voters “think that all of our budget goes to PBS, Solyndra, foreign aid, and birth control bills” because of Republicans continuously hammering those issues. Luntz said that most voters just want the country to work together and stop fighting.

Luntz tried to get the audience to think about whether Obama would actually be able to work with Congress, given that “he doesn’t talk to them.” Maher rebutted Luntz by saying Congress hates Obama more, though he did acknowledge that the president is not necessarily a people person.