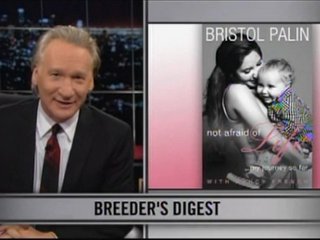 After examining President Barack Obama’s leadership capabilities earlier on tonight’s Real Time, Bill Maher went to some familiar territory at the end of the program: Palin-bashing. This time, though, it wasn’t Sarah: it was daughter Bristol, over her new memoir, Not Afraid of Life. And judging by just how far he went to bash the younger Palin, Maher didn’t feel like he had much to fear, either.

Yes, thanks to the Dancing with the Stars appearances and this new book and the like, Bristol Palin is very much a public figure, and criticism comes with the territory. But this was more than criticism, and occasionally it hit uncomfortable territory. For example, Bristol Palin’s book inspired this op-ed, but Maher’s opening salvo was:

“Bristol Palin has to admit that the reason she fucked Levi over and over until a baby fell out is because she liked it.”

Emphasis ours. Judging by that linked Washington Post column, Maher’s trivializing of the Palin-Levi situation may have been a serious misstep. And the segment kept being somewhat squirm-inducing, with Maher cracking that the working title of the book was Whoops, There’s A Dick In Me. Maher even took the shine off one of the better jokes (“They’re not birth control pills if they’re shaped like Fred Flintstone“) by including a patronizing “hon” before delivering it.

And yet…we were left torn by the clip you’ll see below, because for all the uneasy moments, as far as the actual jokes themselves went (especially after the Bristol stuff ended), this was one of the better Real Time segments you’ll see. There was a natural flow to the proceedings – one gag led into another smoothly, and many of those gags hit the mark.

There was the mocking the early stages of the last Republican presidential debate for turning into a contest to see “who’s made more babies than an Al Green CD on repeat.” There was the line about how if the Duggar family (stars of this program) had 19 cats instead of kids, “their show would be called Hoarders.” We’re just afraid that the Bristol Palin vitriol reached such a level that no one will care about anything else. Video, via HBO: