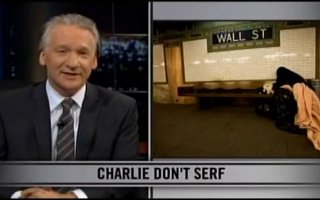 Bill Maher was his usual understated self on Real Time tonight, urging everyday Americans to begin “a class war” on Wall Street. And he illustrated the need for such a fight by drawing a comparison to the backlash received by one Charlie Sheen after his disastrous show in Detroit. And as much as we groaned initially about having to hear Sheen’s name again, we’ll admit Maher got in some good lines.

Here was the common ground Maher found between what Sheen’s Detroit audience said, and what America as a whole should say: “This is bullshit, and I want my money back.” And after a mini-digression into the idiocy of paying to go see Sheen, Maher circled back around to the class topic:

“And if you think a guy living large, and rubbing your nose in it that you’re not, is funny, here’s one you’ll really love: you have to pay your taxes next week, and General Electric doesn’t.”