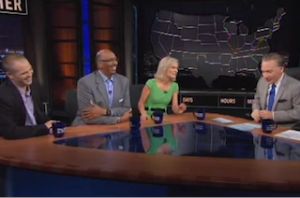 In his first show back on the air since America’s Syria debacle began, Bill Maher declared that President Obama’s “greatest achievement” in this whole thing was turning Republicans into the “peacenik party.” This led Maher to coin a new term to help explain why so many in the GOP have switched positions on military intervention and any number of other issues just because Obama is for them.

Maher suggested that First Lady Michelle Obama’s new program to get kids to drink more water may have been designed as a test just to see if Republicans will go against anything. “That’s not water, that’s Socialism juice!” he imagined them saying.

He went on to list issues like the NSA, where, “When Bush was doing it, it was OK. When Obama started doing it, he was mega Hitler on acid.” Maher said, “We need a word for when you change your mind because Obama had agreed with you. He then presented his new addition to the dictionary: “blacktrack.” 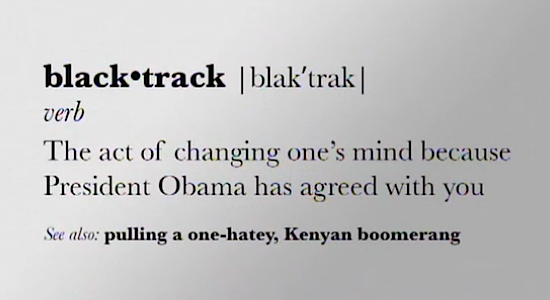 “Are the Republicans sincere about being an isolationist party,” he asked his guests, “or are they just ‘blacktracking’ and as soon as we have a white president they’ll be back to kicking ass and taking names?”

Michael Steele ventured and answer, after expressing his discomfort with the term. He said the change is just a case of the “libertarian voice” moving out of the background and beginning to “assert itself.”

“Republicanism fell on its face after the Bush years,” Matt Taibbi said, “and I think they had to search around for a new ideology.”

Steele added that there might be some “idiots” who do think that the Republican opposition has something to do with Obama’s race, but he’s not one of them.

“I’m one of those iditots!” Maher declared proudly.