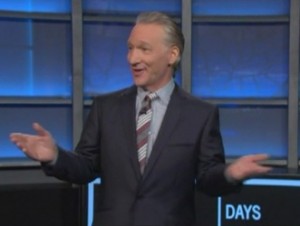 In an episode in which Real Time with Bill Maher host Bill Maher chided Fox News for its renaming of President Obama‘s birthday party as a “Hip-Hop BBQ,” the comic-cum-commentator made another of his own frequent racial non sequiturs about the President. Speaking about the recent debt ceiling deal, Maher quoted Speaker John Boehner saying he got 98% of what he wanted, which shows that “contrary to popular belief, black does crack.”

Maher’s joke (and I get that it was a joke) grinds against the gears of his later criticism of Fox News. In case you missed it, the Network’s website created a stir when it repurposed a Politico post about the President’s birthday party, adding the headline “Obama’s Hip-Hop BBQ Didn’t Create Jobs.”

Fox Nation’s decision to characterize the Stevie Wonder-headlined presidential birthday party a “Hip-Hop BBQ” was only aggravated by the fact that a Fox News executive, VP of Programming Bill Shine, elected to defend the choice based on the flimsiest of editorial fig leaves, saying “We used the hip-hop reference per Politico’s Playbook story this morning which stated ‘Also present: Chicago pals, law-school friends, donors–and lots of kids of friends, who stole the show by doing dance routines to the hip-hop songs, in the center of the East Room.’”

That leaves the reader with two choices. Either Fox Nation’s editor wanted to paint a picture of a raucous urban throwdown at the White House, or they compose their headlines by throwing darts at the text of whatever Politico story they’re ripping off. There were no live hip-hop performances at the event, and the DJ reportedly included the genre in a rotation of recorded music that included “Motown, hip hop, and ’70s and ’80s R&B.” If that makes it a “Hip-Hop BBQ,” then you could as easily argue that this clip makes Fox News a “Tommy Christopher network.”

Also not helping Shine’s case is the fact that exactly none of the event’s overwhelmingly white attendees made it into the composite photo that Fox Nation used to pump the story.

Shine would have been much better served admitting that an editor made a mistake in judgment, as borne out by the fact that they’ve had to close comments on the story because they were “becoming incendiary.” An apology doesn’t necessarily indicate malicious intent, and while critics probably wouldn’t give Fox News the benefit of the doubt, the headline was less-than-thoughtful, at best. Shine shouldn’t be defending it, he should be apologizing for it.

Maher and his panel called Fox Nation out for this, with Salon’s Joan Walsh commenting that “Every chance they get, they want to show you that he’s black.”

Walsh’s criticism, of course, could easily have been directed at…Bill Maher from several minutes earlier. During his monologue, Maher talked about the universally reviled debt ceiling compromise, and said “John Boehner bragged that he got 98% of what he wanted from Obama in the deal. So, contrary to popular belief, black does crack.”

Maher is referring to the “black don’t crack” phenomenon, the observation that the characteristics of black skin prevent the appearance of aging. Here, though, the “cracking” is not of the skin, but apparently, of the will.

Now, a great number of Bill Maher’s references to the President’s race have to do with calling out others for subtle (and not-so-subtle) race-baiting, but he also just brings it up out of the blue quite a bit, and not in a good way. I don’t want to over-analyze the premise of this joke (was it Obama’s blackness that made him crack? Was the cracking in spite of the blackness? Can black only be cracked by the likes of John Boehner?), but it’s not pretty, any way you look at it.

Maher’s credibility as a social critic is weakened by his own constant references to blackness in what he seems to think is a “positive” context, like this wish that America elect a POTUS II Society:

The idea that President Obama alternately is, or should be, a gangsta president (OGOTUS?) seems to be more than just a comic premise to Maher. He genuinely thinks that Obama should routinely mix and cook Republicans in a pot like gumbo (weekly, monthly, and yearly, to be precise), and while that’s a thought that probably appeals to anyone frustrated with political gridlock, it’s never been who Barack Obama is.

Race is a complicated issue, to put it mildly. It defies simplistic rule-making. I don’t think it’s necessary, or desirable, to “forget he’s black.” In the three years I’ve been covering the White House, I have noted, every time it’s happened, that I’m in the same room as America’s first black president. As Joe Biden would say, that’s a big effin’ deal, but not just for the self-congratulatory nature of what it says about us. Whatever you think of his policies, or his negotiating skills, the obstacles he surmounted to arrive there bespeak an undeniable strength of character. Overcoming simple-minded expectations (like Maher’s and Fox Nation’s) is just another one of them.