Maher Defends The NSA: Slippery Slope, But We Need Gov’t To Protect Us From Terrorists With Nukes
video

Maher Defends The NSA: Slippery Slope, But We Need Gov’t To Protect Us From Terrorists With Nukes 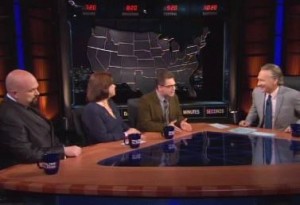 Bill Maher made it very clear he considers the NSA phone and internet snooping to be unconstitutional, but admitted he’s conflicted how to feel about the program in the real world. He argued that sometimes terrorist concerns necessitate a fair amount of government surveillance, remarking that people wouldn’t be so “absolutist” about their privacy if they thought terrorists were building nukes. All of this shocked Republican panelist Ana Navarro, who, in the middle of the discussion, asked, “Who are you and what have you done with Bill Maher?”

RELATED: Bill Maher Defends SOPA: ‘There Is A Moral Dimension To’ Piracy No One Talks About

Maher first noted how these revelations aren’t necessarily breaking news, with Kevin Williamson noting how such widespread government surveillance did not start after 9/11, it was going on for years earlier. Navarro remarked that the NSA is now acting as the DNC and the DOJ is the KGB. Comedian Dana Gould suggested that part of the blame goes to technological expansion for making it harder to maintain the “illusion of our privacy.”

Williamson said much of what was in the PATRIOT Act was used before in specific investigations, but what the NSA is doing now is indiscriminately “going after the general population” and hoping they find something. Maher admitted, “This issue is not a no-brainer.” He said terrorist plots have probably been thwarted, and declared that he’s okay with it now, because it’s Obama in office as opposed to a hardline Republican.

And on top of this, Maher said that nukes tip the scales for him, doubting that people would be so gung-ho about their privacy if they knew terrorists were out there somewhere developing nuclear weapons and waiting to strike the United States.

Maher also surprised the panel by expressing his support for the Supreme Court ruling this week declaring all people arrested, whether they’re charged with crimes or not, should be DNA swabbed. A stunned Navarro asked, “Who are you and what have you done with Bill Maher?”