Bill Maher Disses The Daily Show Rally: It’s Better To Have A Rally That’s “About Something” 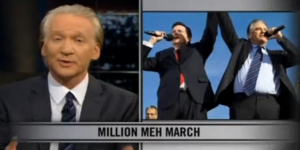 Wow. It looks like Keith Olbermann isn’t the only big liberal star to have a problem with the message espoused by Jon Stewart and Stephen Colbert at last week’s rally. On tonight’s Real Time, Bill Maher also had a problem with the way Stewart seemed to equate the extremes on the Left with the extremes on the Right. During an extended (and sure to be debated) New Rule, Maher argued that he didn’t “need to pretend that both sides have a point here.”

“The message of the rally, as I heard it, was that, if the media stopped giving voice to the crazies on both sides, then maybe we could restore sanity. It was all nonpartisan and urged cooperation with the moderates on the other side forgetting that Obama tried that and found out…there are no moderates on the other side. When Jon announced his rally, he said the national conversation was dominated by people on the Right who believe Obama’s a Socialist and people on the Left who believe 9/11’s an inside job, but I can’t name any Democratic leaders who think 9/11’s an inside job. But Republican leaders who think Obama’s a Socialist…all of them.”

There’s been a lot of talk about how the Tea Party has been causing a rift in the Republican establishment. Now that the Dems are the underdogs, is it time for them to split in half?

A Civil War between the fans of Stewart/Colbert and Maher is definitely interesting to imagine. Both sides seem too smart to really become adversarial towards each other (again, it’s important to remember that, deep down, these are entertainers and not politicians), but it would be interesting to see if it goes any further. So who’s ready for it? The battle of the ratings versus the uncensored curse words! Maher has made the first blow. It’s doubtful that either Stewart or Colbert will pick up the gauntlet, but we can imagine where it would lead.

Check out the clip from HBO below: