Bill Maher Distinguishes Himself From Limbaugh’s ‘Slut’ Remark: ‘I Don’t Have Sponsors’ 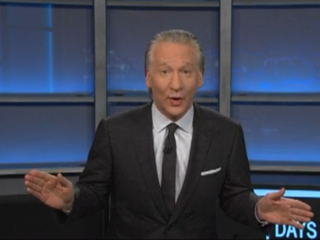 The allegations of sexism against Rush Limbaugh have had the somewhat unexpected result of bring allegations of sexism against Bill Maher to the fore. Many have pointed out that, if Limbaugh has to answer for calling someone a “slut,” surely Maher has to answer for the time he used a c-word of Latin etymology to describe Sarah Palin. Maher heard about it and, last night, was frustrated to hear that Limbaugh himself had brought it up and “tried to drag me into this bullshit he caused.” He laughed in his monologue and made a clear distinction between his show and Limbaugh’s: “I don’t have sponsors.”

Maher started off his monologue with an explanation of the Limbaugh birth control scandal, joking that the Republican “approach to a woman’s body is the same as the economy– they have no idea how it works, but they’re eager to screw with it anyway.” He joked that he thought Limbaugh didn’t know how birth control works because “you’re thinking of oxycotin,” and praised him because “most guys can only repulse women one at a time.”

He then turned to the fact that Limbaugh was demanding the Obama SuperPAC he donated to return the money because “I sometimes called Sarah Palin a bad name.” Chuckling to himself, he noted, “I don’t have sponsors, I’m on HBO.” He then noted that Limbaugh’s first sponsor to leave him was a mattress company: “sluts use a lot of mattresses!”