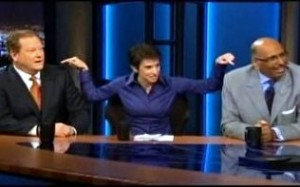 When Real Time with Bill Maher’s staff booked both Ed Schultz and Michael Steele to appear on the show tonight, everyone involved had to be salivating over the potential for the two to get into loud disagreements. And when the panel debated politicians’ relative honesty and proposed Medicare vouchers, the inevitable came to pass.

It started with a mention of the already-infamous Jon Kyl/Planned Parenthood controversy, which Maher called “American lying at its finest.” Faced with the unenviable task of rationalizing Kyl’s handiwork, Steele noted there are “hyperbolic statements on both sides,” specifically about Republicans’ supposed desire to watch old people “get sick and die.”

This, though, prompted a retort from Maher – if Republicans don’t want that, what to make of Rep. Paul Ryan’s (R-WI) proposed Medicare voucher. At this point, things really started getting loud. There was Schultz yelling at Steele for mentioning President Barack Obama in the same breath as Kyl. There was Steele begging Schultz to “bring it down a notch.”

And there was Steele, when asked about what would happen to seniors who run out of Medicare voucher money:

That one got quite the audience reaction, and Schultz clearly relished the chance to make an incredulous face. There was even a hint of a fistfight at one point, but Maher wasn’t too keen on the idea. Oh, and Amy Walter, political director for ABC News, was there also. Unfortunately for her, during the segment you’ll see below, she mostly functioned as Steele-Schultz buffer. (Which, come to think of it, was probably a key role.) Watch – and listen – via HBO.