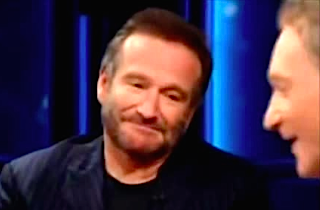 Robin Williams only appeared on Real Time twice over the show’s 12 season on HBO, but in an extended remembrance published on Time magazine’s website Wednesday Bill Maher described him as one of the few “show business people” who could was able to succeed on the show’s panel.

Maher said he did not know Williams very well, and isn’t sure how many people really did. But beyond simply his comic ability, Maher said he admired Williams’ humility and general ability to modulate his energy based on what a particular situation called for.

The thing about Robin that I loved the most — and again, with limited experience — is that when he did my show, he was so great at it, because he was able to achieve something that eludes a lot of comedians who have tried to do Real Time. It’s not an easy show to do, because you have to be very smart about politics. We don’t use a lot of show business people on the panel. I can name the show business people who can do it on a couple of hands — Ben Affleck, George Clooney, Alec Baldwin, Kerry Washington — people who are very politically aware and involved, and that is their passion. But mostly, show people don’t do it — we have them on, but in one-on-one settings in the mid-show. But Robin did the panel, and he was able to both modulate his normal manic persona down to what was appropriate for the show he was doing, and also, completely still be Robin Williams. That is not an easy trajectory to find, and he did, and I always loved him for it. First of all, it means you’re humble — that you understand that you have to shape-shift a little to the show you’re doing. Some people don’t do that. Some people just refuse to do that. They wanna be exactly who they are, on whatever show they’re doing. I don’t agree with that. I think when you’re the guest, you have to bend a little. He did that. He was still Robin Williams, but he was exactly right for the show he was doing.

Maher goes on to praise Williams’ “fast and furious” comedic style, but more than that his “humanity.”

“Some people, you get the impression that they’re putting on an act all the time,” Maher said “I didn’t get that impression with Robin Williams. I didn’t know him well, but I always thought, there’s a very decent person there.”

To get a taste of what Maher is talking about, check out this clip from 2005 in which Williams shares the Real Time panel with then-Senator Joe Biden. Watch video below, via HBO: