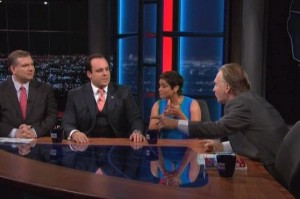 Maher began by noting the Libya moment from the second presidential debate, when Romney said the president didn’t call the attack an act of terror until 14 days later. He then showed a quote from the following day — in which Obama said “no acts of terror will ever shake the resolve of this great nation.” As well as a quote from the day after.

This is a gaffe, Maher said. As Fund and Epshteyn heatedly argued against that point, Taylor told them, “You watched Mitt Romney on the president, and buck his ass right into the hall.”

Maher himself was hung up on his central point: Romney said it took the president two weeks say act of terror, but the quotes say otherwise. “Please admit that,” he said. Epshteyn argued that Obama “didn’t call it terror” despite using the phrase.

“You guys are so fucked up,” Maher replied.

As the panelists continued to talk over each other, Maher again interjected. “Your attitude is, ‘Fuck facts,'” he said. Just on this one point, Maher added, admit that he said “act of terror.”

He did say it, Epshteyn replied, but “he didn’t call it” that. Plus, he added, why didn’t Ambassador Susan Rice call it that?

Maher then pointed to CIA information from September 15, which said the attack was spontaneous, related to the video. Why, he asked, does it have to be either terrorism or the video? The video was about terrorism.

What matters, Epshteyn argued, is why there wasn’t enough protection. But Maher argued that the White House cannot micromanage every embassy.

Driving him his argument, Maher quoted from President George W. Bush’s response to Sept. 11, 2001, in which he called what happened “an apparent terrorist attack.”

“One airplane could be apparent,” he said. “Two?” He summed up his point: “In the moment, you don’t get everything exactly right.”

Twenty cities had riots that day over the video, Maher said. But Benghazi was different? That’s the what the White House and CIA are now saying, Epshteyn argued.

“I don’t think they’re mutually exclusive,” Taylor chimed in. “And by the way, I put on a uniform and served.”