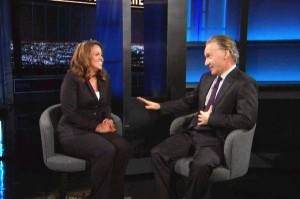 Two years ago, Christine O’Donnell was the Republican candidate for Senate in Delaware, and her race got some national attention after Bill Maher infamously aired a clip of her on his old show Politically Incorrect, where O’Donnell admitted she used to dabble in witchcraft. Maher was unable to get O’Donnell on his show that year, but finally, she appeared on Real Time tonight. Maher began the interview by apologizing to O’Donnell for how much attention the “witch” video got.

Maher told O’Donnell, “I made your life hell and I’m sorry about that.” He said that he didn’t mean for the clips of her on Politically Incorrect to be such a big factor in her Senate race. O’Donnell laughed it off and admitted that her campaign erred after releasing an ad where she said “I’m not a witch.” Maher admitted that it did “hurt [his] feelings” that O’Donnell never came on his show during her campaign, but O’Donnell said it was just a scheduling issue.

Turning to the events in North Carolina this week, Maher asked O’Donnell what she thought of Clinton’s speech and how well it was received. O’Donnell said it sounded like Clinton was running based on how much he referred to policies from his administration. She also disputed the idea that the economy is doing better, saying that Obama had four years to fix it.

Maher told O’Donnell that to him, the Republican party is acting like everything in the United States was perfect until “President Blackenstein” took over, and that’s when the country took a dark turn. O’Donnell admitted that the Republicans were “abandoning the principles they stand for” in 2008, but then criticized Obama for continuing to blame the Bush administration.