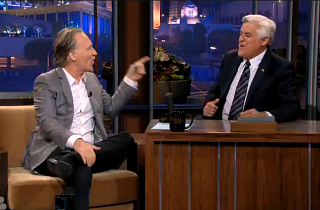 Bill Maher appeared on The Tonight Show last night and ripped on NBC and Jay Leno directly to the host’s face.

While discussing the situation in Egypt, Maher suggested the release of deposed President Mubarak may signal the Egyptian desire to bring him back because he was better than the replacement, “kind of like what NBC keeps doing with you, Jay.”

Leno’s stint as Tonight Show host ends in February 2014, reportedly after being pushed out by network brass. This marks the second time in a decade that Leno was “fired” by the network; except the first time, he was brought back during the infamous debacle known as “ConanGate.”

Leno looked down uncomfortably while the crowd cheered on. Maher said “I don’t want to get into it,” before launching into a swipe aimed at NBC’s botched handling of Leno’s career:

MAHER: You were number one in the ratings at that time? And now you’re number one again? And they’re firing you?

MAHER: I have a question.

LENO: I have the wrong guests on all the time. That’s the trouble.