Bill Maher: GOP Is Made Up Of ‘Magical Thinkers’ Who Mistake ‘Superstition For Science’
video

Bill Maher: GOP Is Made Up Of ‘Magical Thinkers’ Who Mistake ‘Superstition For Science’ 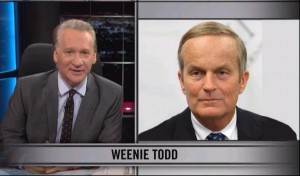 Bill Maher concluded his show tonight by going after the Republican party for taking positions that he argued are just fantasies that have no place in serious political discussion. He used the recent comments by Congressman Todd Akin to argue that the GOP frequently mistakes “superstition for science” and they do not have “grown-up answer[s]” to important economic issues.

After dismissing Akin as an “asshole,” Maher argued that the Republican party as a whole is a party of “fantasy.” He said that it is not a big leap to think that fundamentalist Christian politicians who believe in creationism also believe in “tiny ninja warriors” inside every woman that “lie in wait for bad people’s sperm.”

Maher said that Akin is not an anomaly in the GOP in mistaking “superstition for science,” arguing that “they’re all magical thinkers.” He extended the argument to the party’s economic beliefs, in particular their desire to cut the deficit in a way that does not include raising taxes or cutting spending. And as for “supply-side economics,” while Maher said it was a failed experiment that no one should take seriously anymore, he argued that Paul Ryan “still believes it.” Maher joked that the Republican party is so committed to fantasy, the symbol of their party might as well be a unicorn.

Maher contrasted the adult way of dealing with political problems and the way he argued the GOP handles them.

“The grown-up answer to our massive national problems is ‘Identify them scientifically and prioritize.’ The Republican answer is ‘There isn’t a problem, and anyone who tells you different is a liar who hates America. We don’t have to make hard choices. We just have to ignore science and math. That’s why God gave us values.'”

Maher concluded by running down a list of other policy positions the Republicans support that continue along the “fantasy” trend, including teen abstinence and global warming.