Bill Maher: How Could ‘Our First Black President, And Our First Pothead President’ Be So Bad On Pot?
video

Bill Maher: How Could ‘Our First Black President, And Our First Pothead President’ Be So Bad On Pot? 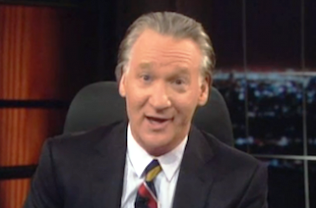 “Pot is the new gay marriage,” Bill Maher said at the start of his New Rule segment Friday night, “and by that I mean it’s the next civil rights issue that needs to fall.”

Maher pointed out that gay rights groups pushed ahead with their movement despite its unpopularity, forcing it onto the agenda, but questioned whether Democrats would do the same with marijuana legalization.

“If Republicans were smart,” Maher said, “they would steal marijuana from the Democrats as a freedom issue. Of course they’re not smart so they won’t. Because they’re squares living in a Reefer Madness cartoon, a cartoon where millions of Americans are still trapped in a no-man’s land where a pot dispensary can sell you weed if you have a ‘card’ that you got from a ‘doctor’ who certifies that you have a ‘disease’—which is just Don’t Ask Don’t Tell for pot smokers.”

“It creates a culture of dishonesty that gives a bad name to people like me who genuinely suffer from whatever it is I told them I had,” Maher said.

He got serious when he linked the legalization of pot to the pernicious effects of the drug war, which disadvantageously affects African Americans at a rate of seven-to-one. Maher called this “a subtle way to surpress the black vote,” as forty-eight states limit voting rights for felons. “Only two states do not,” Maher said, “Maine and Vermont, and Maine’s black population consists of a bear.”

Maher noted that the gay rights movement succeeded when it convinced the nation that gays were their neighbors and coworkers, and that it wouldn’t be very difficult to make the same case for potheads.

“In fact, I bet there’s one pothead who you all know,” Maher said, putting up a picture of Barack Obama and invoking his Choom Gang days. He chastised the president for “evolving” on gay marriage while escalating the war on drugs, essentially punishing people for “doing the exact same thing he did back in Honolulu”—a similar case to one made by Mediaite Editor Andrew Kirell back in the day—with repercussions that last for life.

“How could our first black president, and our first pothead president, be aware of that and just look the other way?” Maher asked. “If anyone can say smoking pot won’t ruin your life, it’s the guy who smoke bails of it and then became leader of the free world.”