Bill Maher: I’d Bet My Own Money On ‘Multi-Tasking Ninja’ Obama Getting Re-Elected 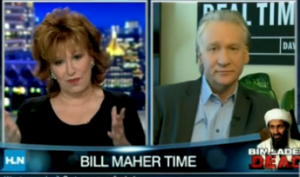 Bill Maher was in high spirits last night appearing with Joy Behar to celebrate President Obama’s national security success with Obama and laughing, “this has got to eat at [Republicans] because this is supposed to be what they’re good at.” Maher was so impressed with our President, the “multi-tasking ninja,” that he concluded if Republicans can’t give Obama credit now, then they probably wouldn’t ever be able to do it for anything.

“When I hear Donald Trump say ‘he’s the worst president ever’ – really? You know – got health care passed, stopped a depression from happening, you know the economy, the shape it was in compared to where it is now, finally got this bin Laden monkey off our back. It’s just hatred. They’re just haters.”

One point of clarification though, Trump’s criticism of Obama was made before Bin Laden’s death, and since the capture, Trump wisely demonstrated a different, congratulatory tone towards Obama.

Maher was much funnier though addressing some of the other potential Republican presidential candidates. Suggesting Republicans “can’t rely on Tim Pawlenty’s raw sex appeal forever” and that Michele Bachmann is “for people who find Sarah Palin too intellectual,” Maher made a confident prediction. Maher declared, “if I was betting my own money, I would bet anything on [Obama’s] re-election.” If the election were held very soon that certainly seems like a smart bet, but with the election still far away, only time will tell if Obama’s earned goodwill can hold over.

Watch the clip from HLN below: