Bill Maher: If Focus On The Family Is Really Doing God’s Work, Why Are They Always Wrong?
video

Bill Maher: If Focus On The Family Is Really Doing God’s Work, Why Are They Always Wrong?

Maher: If Focus On The Family Is Really Doing God's Work, Why Are They Always Wrong? 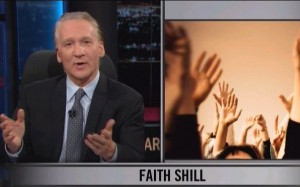 Bill Maher ended his show tonight by asking the Christian group Focus on the Family a simple question: “If you’re doing God’s work and God is perfect, how come you’re always wrong?” He brought up a huge list of things the group warned would happen four years ago if Barack Obama was elected to the presidency. It’s four years later, and none of their predictions came to pass, leaving Maher to suggest an apology to the president might be in order.

Maher read out some of their predictions, including the end of the Pledge of Allegiance, the taking of all guns, and pornography freely available at all gas stations. He gave them half-credit for predicting the end of Don’t Ask, Don’t Tell, but went off the rails when they warned it would lead to “a Fire Island booze cruise sponsored by lube.”

Maher acknowledged that the group is nothing more than a cross between the Westboro Baptist Church and Bain Capital, calling them grifters. However, he was surprised that they predicted exactly zero out of 34 items correctly; a bad track record, in his opinion. He presumed that this might lead to an apology from the group to the president, but said that “in today’s far right,” there are no apologies to be had.

“Is there no penalty in America any more for just being wrong? Wrong. Forget ideology… you thought something in the future would go a certain way, great stakes were riding on whether you got it right, and you didn’t.”