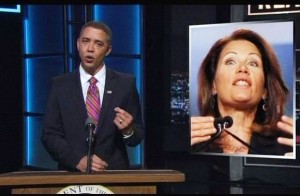 Last week, Obama impersonator Reggie Brown stole the post-Weinergate spotlight by telling jokes so scathing to Republicans that he was yanked mid-routine from the Republican leadership conference. Never a fan of censorship, Brown caught Bill Maher‘s eye, and the comedian invited Brown onto his program last night to finish the act he started a week ago.

Maher, of course, had strong words for the “white douchebag” that removed Brown from his podium while doing his act, explaining to his audience how Brown had “started talking about Republicans and the sandman came out” (organizers also cited the racially sensitive nature of the act as a reason for removing him). Then he had Brown come out again, and begin where he left off.

Now… as I was saying,” Brown began his act, as if a week and some controversy had not transpired between now and the last time he gave this same speech, “Michele Bachmann. And you thought black women were scary.” The speech didn’t get much more PC after that, with jokes about nearly everyone in the Republican field, from Herman Cain (“he’s one of my undercover ACORN volunteers”) to Mitt Romney (“he is what people who hate white people think of when they think of white people”). Getting off relatively easy was Jon Huntsman, who served as the set-up to a “self” (self being Barack Obama)-deprecating religious joke: “they said they wouldn’t elect a Mormon president, but they said the same about Muslims and look at me.” One wonders whether this was Brown’s act all along or if he sharped the jokes up a bit now that he had been censored.