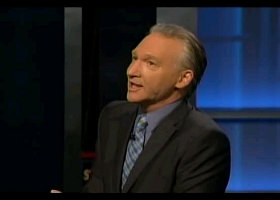 The emotion shown by Rep. Keith Ellison (D-MN) at Rep. Peter King’s (R-NY) Muslim radicalization hearings garnered much attention, and we have a feeling Ellison’s appearance on Real Time with Bill Maher tonight will get its share of play as well. Maher and Ellison had an interesting conversation about Islam (Ellison converted in college) – but perhaps most interesting were the harsh words Maher had for the radical element of Islam…an opinion he had no problem sharing to Ellison’s face (or the screen it was on, anyway).

Ellison, who was raised Catholic, said he was drawn to Islam initially due to a message of “inclusion and “social justice,” and spoke of the need for “religious pluralism” in society. It was smooth sailing at that point – Maher even said “right on.” But then, Maher went off on radical Islam, deeming “the threat, potentially, from radicalized Muslims…a unique and greater threat” – one, he said, that’s in its “medieval era.” In addition, he cited “trying to get nuclear weapons” and a “culture of suicide bombing.”

But that paled next to Maher’s criticism of the Qur’an, which he called a “hate-filled holy book…which is taken very literally” by radical Islamic terrorists. Ripping suicide bombers is one thing…maligning the holy book for the entirety of Islam is quite another. Ellison, of course, disagreed, saying Maher was “lumping together things that shouldn’t be lumped together,” and that terrorists “take things out of context to do what they want to do” – in fact, that “terrorist rhetoric” has little to do with religion at all.

Maher allowed that the “vast, vast giant majority of Muslims aren’t the problem,” but added that with terrorists, “it just takes one.” Maher also seemed unconvinced of Ellison’s Qur’an defense, even as Ellison cited a passage that claims that taking one life is akin to killing the whole world, and saving a life is like saving the entire world: “Am I getting the wrong translation? ‘Cause that’s what every Muslim always tells me.” Video of the segment below, via HBO. Maher’s no stranger to criticism of Islam, but this was another level.