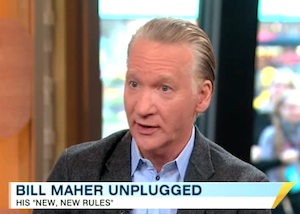 Bill Maher appeared on Monday’s Good Morning America to promote his new book “The New New Rules” and gave some surprisingly frank praise for Republican presidential contender Mitt Romney in an interview with anchor George Stephanopoulos. “You’ve got to feel very bad for Mitt Romney,” Maher observed. “I mean, he has been led so far by Trump, then Bachmann, then Perry, then Cain.” “He hangs in there!” exclaimed Stephanopoulos. “He’s everyone’s second choice.” “I’m rooting for him. Look, because in a country with two political parties, the Republican can always win. I mean — at least he eats with a knife and fork! I mean — he is all that stands between us and the rise of the apes.”

Stephanopoulos earlier asked Maher about his comments that he would bet $1 million dollars that Herman Cain would not be president.

“Yes, I think I would bet a million dollars against Herman Cain,” Maher said. “Wouldn’t you take that bet? He’s not going to be the candidate…and I don’t really have that kind of money to lose on a bet either. But, I mean, this is a guy wearing a pimp hat through a scandal, a sex scandal. So, I feel like that pretty much sealed my thing. This is a guy who has a tax plan that we found out was written pretty much by his branch manager at Wells Fargo.”

Maher’s comment about the ‘rising of the apes’ rubbed the Media Research Center’s Tim Graham the wrong way. “Couldn’t that be seen as a bit racist toward Herman Cain?” Graham noted. “We’re used to Maher slamming religious folks in that way, but “apes”?”

In Maher’s defense, his joke seemed to be a cheeky all-encompassing jab dissing the other conservative contenders he previously mentioned in the segment i.e. Perry, Trump and Bachmann but you be the judge.

Watch Maher’s comments on Romney below via ABC: