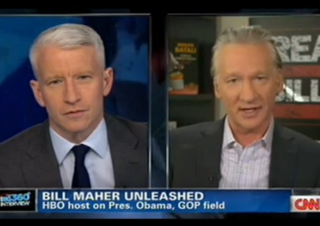 Bill Maher took a break from his regular hosting duties on HBO today to stop by Anderson Cooper 360º and review the State of the Union address. He didn’t have too much negative to say about President Obama, and surprisingly little mean to say about at least one Republican candidate– Rep. Ron Paul, who he called “crazy” but praised for his courage.

RELATED: Bill Maher: People Don’t Like Romney “Not Because He’s Rich, It’s How He Got Rich’

Cooper asked Maher to review the State of the Union, which he didn’t seem particularly happy with, but he noted that liberals often are not. “We carp and complain and we lose a little respect for it sometimes,” he said, adding that he did think that President Obama “seems to come out at the bottom of the ninth and hit it out of the park.” He then went on with the carping and complaining: “These endless debates– too many, Anderson!”

Cooper replied that he thought they were “really interesting,” to which Maher agreed. Useful, too– “we would’ve never found out that Rick Perry was an idiot!” Maher compared Perry to “the cute guy in the bar: the girl is all excited about meeting him and they she talks to him.” He did add that “Monday was a bad episode of the series,” the “series” being the reality show that is Republican Debate Night. Cooper replied excitedly that tomorrow’s CNN debate will have “applause and cheering!” (read: hissing and booing).

Maher replied that he was happy about this news since “it’s better for the fan, for the viewer of this series,” and added that it was great for Gingrich: “Newt Gingrich needs the mob.” And with that, Bill Maher just echoed, verbatim, his good friend Ann Coulter (add that to the 2012 Mayan prophecy betting pool).

Then Maher went on to praise Rep. Ron Paul, who he acknowledged that “some crazy ideas,” but “he’s honest” and has “the guts to stand up there debate after debate while they boo him or look at him as if he had three heads.”