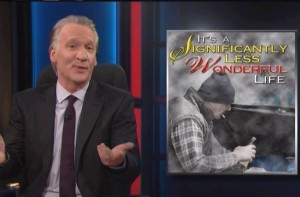 Everyone loves a good underdog story, and President Barack Obama has just that, according to comedian Bill Maher, who said on his Friday night comedy program that Democrats just wish Republicans would admit they were born into laps of luxury.

“New rule: if reelected, President Obama must appoint Bill Clinton to head the EPA because on Wednesday night he cleared away an unbelievable amount of toxic bullshit,” Maher said. “Beginning with knocking down the contention that Democrats are envious of success and sneer at the American Dream of starting out with nothing and making good. No, it’s not that liberals envy the rich, they just wish the rich would admit they were just lucky.”

“One room, one window,” Maher said of Obama’s tiny youth digs. “Going from that house to the White House, that’s starting from nothing and making good. Now you can tell Mitt Romney and Paul Ryan are lucky because when they try to come up with anecdotes on how rough their lives used to be, it’s laughable. Like did you know that when Paul Ryan he worked at, brace yourselves, a fast food restaurant?…Yeah he had a summer job flipping burgers, not because he wanted to, but because his mommy got tired of him locked in his room masturbating to ‘Atlas Shrugged.’…So congratulations, Paul Ryan…you made it against no odds!”