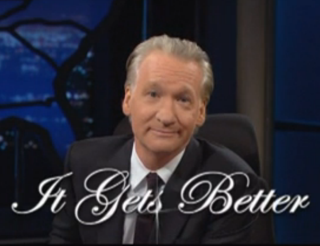 Last night, a monologue on the virtues of socialism and the shame of not openly embracing it was received with hearty applause, exuberant cheers and the kind of laughter so loud it makes you wonder if its source is producing it at gunpoint. I wish I could tell you it’s from Hugo Chavez‘s weekly variety hour Aló, Presidente. It’s not. It’s Bill Maher‘s “New Rules” segment, where he attempts to convince Americans they’re actually really into this socialism thing, whether they know it or not.

On last night’s Real Time, Maher exhorted Americans to “just come out of the closet” about their “love of socialism.” He argued that, while the word “socialism” was “as popular as Casey Anthony at a Chuck E Cheese” these days, Americans didn’t know what they were talking about, as polls showed support for some social programs and health care benefits funded by the government. “What we really say to socialism,” he argued, when Americans decry it, “is ‘I can’t quit you.'”

To fill his weekly quota of unnecessary vulgarity, he added, “it’s like a guy who says ‘sure, I gargle with a guy’s balls once in a while, and there’s nothing I like more than ass play with other men, but you know who I can’t stand? Fags.'” To fill his weekly non sequitur insults at conservatives, he made sure to call Rep. Michele Bachmann and her husband Marcus “America’s indoor Palins” and joke that Marcus Bachmann “hates government employees because sailors are so rough.” He did have a serious point on the latter joke, however– that the Bachmanns do take farm and business subsidies for their private endeavors, which to Maher count as “socialism.”

Proclaiming, laughably, that “the difference between American socialism and European socialism is that European socialism works,” he began an “It Gets Better” speech about how there were many socialists in Europe, “just like you,” and there was no shame in socialism. Political TV characters make their careers off of often misguided, ill-informed statements, but Maher’s naivete at best (willful ignorance of history at worst) in this clip is beyond the pale.

“There are few words more toxic in America than socialist,” Maher marvels at the beginning of this clip, as if no harm has been done in the name of redistribution of wealth. As pleasant as the reverie of equality may be for those who can’t or don’t want to find a niche in which to excel, ignoring the thousands of imprisoned and dead for opposing (or being suspected of opposing) socialism in socialist countries cannot be ignored. The toxicity Maher accurately identifies in the word is the blood that stains it– from the “agrarian socialism” of Pol Pot to the enthusiasm of Argentine butcher-cum-pop-art-trinket Che Guevara for “intransigent hatred for the enemy that takes one beyond the natural limitations of a human being and converts one into an effective, violent, selective, cold killing machine.”

Some will argue that the violent, evil state behavior described above is actually the result of communism, and not the economic system. Those who do so ignore at their own peril that the two have been inextricable for most of history. “Socialism or death” is the chant schoolchildren are forced to recite in communist classrooms– long ago did socialism become much more than an economic euphemism for the state apparatus. There are exceptions, of course, which Maher eagerly tries to turn into rules: Sweden, Canada, the Social Contract ideal of small European villages where people look out for each other. But to make those nations– a tiny, wealthy, Caucasian slice of humanity that looks a lot more like Bill Maher than most of humanity– the face of socialism is to do a disservice to the majority of socialist states on the planet that happen to not be comfortably underpopulated frozen paradises: Cuba, Venezuela, Cambodia, Angola, et al., and renders his entire argument moot.

Needless to say, for anyone who has had any practical experience with socialism the way most of history has known it, the following clip is simplistic to the point of insult. The segment via HBO below: