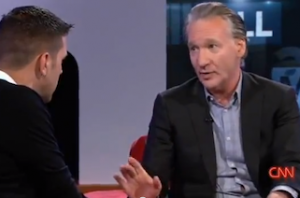 Immediately following the live airing of his own Real Time on HBO, Bill Maher gave CNN’s new Friday night show Stroumboulopoulos when he appeared as a guest to discuss his take on the political media landscape. Maher used his time on CNN to take shots at “horribly misinformed” Fox News viewers and “hypocrites” who “hate socialism.”

Maher told Canadian host George Stroumboulopoulos that America’s “big problem” is that we actually do have a “government as good as the people.” He described Americans as “very easily fooled” and “horribly misinformed.” And in Maher’s world, no one is worse off that the people who watch Fox News, who “live in a bubble I can’t even describe to you–facts never get in.”

He explained that this lack of information on the part of voters is what’s made it so hard for Congress to pass legislation. Another big problem is our “every man for himself” that runs counter to the “quasi-socialism” of every other modern, Western country. “That’s not a dirty word,” Maher said, “but in America, when you say ‘socialist,’ most people, they don’t know what it means, but they know it’s something super bad, like pedophilia or atheism or something like that.”

“Meanwhile,” he continued, “they do nothing but take money from the government.” Pointing to programs like Social Security, Medicare and Medicaid, he called conservatives “such hypocrites” for accepting those benefits while claiming to “hate socialism.”

Maher did see some hope for the U.S. to grow out of its “teenage” state and “grow up” into something more resembling the old societies of Europe. “They do have that sort of wisdom and that savvy,” he said of Europeans, “and they don’t get excited about, ‘Oh my god, we’re becoming a socialist country.’ So what? If it works, that’s all that matters. Let’s just do what works.”