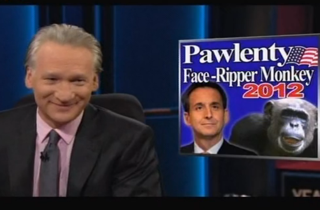 With the 2012 Republican presidential race thinning out, Bill Maher is becoming increasingly irritated with the quirkiness factor of the field, but can’t see a way out. “The crazier the contestants, the more the voters like it,” he argued on last night’s Real Time, and the search was on to find “a candidate meaner than [Donald] Trump and dumber than [Sarah] Palin.” To that end, Maher decided to help out with a few suggestions, only half of which were fully human.

To find the perfect candidate, Maher narrowed down the requirements demanded from Republican voters to three major issues: “never compromise on anything or ever work with the Democrats,” “always treat Obama like he’s some mysterious black guy who turned up uninvited at your country club,” and “never admit the government is useful for anything.” Apparently no one on the current field sufficiently met those requirements, so he found some better candidates: Charlie Sheen, Ted Nugent (the only actual Tea Party member on the list), Andrew Dice Clay, the Norse god Thor, Arnold Schwarzenegger‘s penis, and, finally, “Face-Ripper Monkey.”

Obviously, Maher was most excited by Face-Ripper Monkey, and actually didn’t give in to the temptation of obvious race jokes with this one. Face-Ripper Monkey, he explained, was the perfect candidate because “his very existence disproves evolution” and he proposed “direct common sense solutions– like ripping off people’s faces.” But how would he reconcile these views with the fact that, given the choice, voters seem to prefer “Generic Republican” to any actual candidates? Well, “face-ripper monkey can accept not being on top of the ticket.”