Bill Maher: Gingrich Is An ‘Idiot Who Has Always Been Wrong About Everything’ 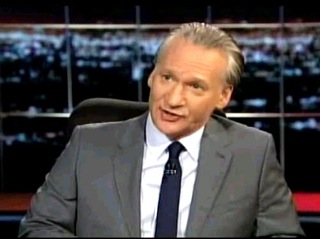 With a critical mass of GOP candidates now confirmed for 2012, Bill Maher leapt at the opportunity to judge them. After a few incorrect assessments on who is in and who isn’t confirmed (Gary Johnson isn’t confirmed, but Mike Huckabee is?), Maher specifically went after Newt Gingrich‘s record, challenging his reputation as an “ideas guy” and instead arguing that “he’s an idiot who has always been wrong about every single thing he has ever talked about.”

“Do you think the American public could stand looking at these people?” Maher concluded his round-up of potential and current candidates. No one on his panel seemed to envy Republican voters, with Andrew Ross Sorkin betting the GOP winds up with “old people that have run before,” and the other two panelists– Michelle Bernard and Reihan Salam— surprisingly warming up to Gingrich. Bernard gave him “a lot of credit for negotiating with Bill Clinton,” a position Salam supported, adding that his moderate record explained much of his extreme rhetoric in 2011: “he has to live down a lot of moderate positions.”

Maher, however, wasn’t convinced. “What I find really scary about Gingrich is his certitude, which is the hallmark of unbright people,” he noted. Sorkin, who mostly stayed away from the Gingrich talk, instead was trying to figure out a candidate the Republicans could run that would stand a chance, settling finally on New Jersey governor Chris Christie, until Maher pointed out that he had somehow made evolution a significant issue in his governorship. “Oh, okay, I take it back,” Sorkin quickly responded.

It’s not shocking that the Real Time panel would have a hard time with Gingrich, but it is somewhat telling that half the panelists suspected his Achilles’ heel to be a moderate record, and not an extreme one.

The discussion via HBO below: