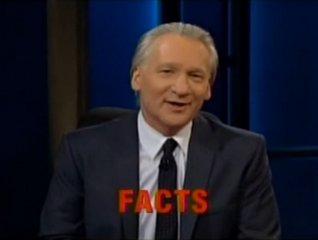 Let’s face it – it’s not really an episode of Real Time with Bill Maher if the host doesn’t spend some time bashing the Republican party, and tonight, Maher closed out his program doing just that. In addition to ridiculing the party for falling short on its supposed strengths (“The Republicans, the fiscally conservative, strong on defense party, are neither fiscally conservative nor strong on defense”), Maher also paid some very…detailed compliments to the White House’s current occupant.

Maher began by expanding on his view that Republicans don’t do what they say they do well very well at all:

“9/11 happened on your watch, and you retaliated by invading the wrong country, and you lost a ten-year game of hide and seek with Osama bin Laden.”

…but this segment was more about questions. Questions like, “How many Muslims does a black guy have to kill in one weekend before crackers climb down off his ass?” Or like, “Why focus on the terrorists who reduced Wall Street to rubble when you can help Wall Street reduce the whole country to rubble?” Or there was the following line, which…we don’t even know:

The segment was something of a mixed bag…one bit, involving Maher reciting facts while a graphic reading “FACTS” flashed on the bottom of the screen (in order to warn certain viewers who may be scared of facts), was so absurdly, intentionally on-the-nose we couldn’t resist it. And there was even a bit of balance – the “FACTS” graphic was essentially a Fox News dig, and Maher took a (slight) jab at MSNBC shortly thereafter. But Maher making such a big deal of Obama being black, and especially dropping a “gangsta” in that Obama description above, just sounded weird coming from a white person, and we couldn’t quite get past it.

Ultimately, though, this segment was about political parties, not awkward references to skin color, and in a fitting cap to a segment featuring so many questions, near the end, Maher posed another:

“30 percent of this country will always vote Republican. I’m just asking why.”

Video, via HBO, below.