Bill Maher On MSNBC: My Jokes About Palin And Bachmann Were Not Wrong 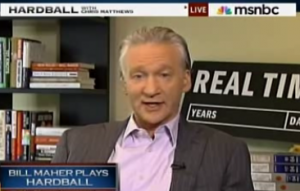 Bill Maher appeared on Hardball today with substitute host Chuck Todd and briefly addressed his recent controversial remarks regarding Sarah Palin. Maher also shared his opinion regarding how President Obama has handled the Libyan conflict perfectly and how Donald Trump is likable in person, but a “major BS’er.”

When Todd asked Maher whether he regretted any of his comments about Palin or Republican Congresswoman Michele Bachmann, Maher laughed off the criticism:

“There’s a lot of people in America who have, of course, nothing to do except look for something to get mad at. And I’ve been a frequent target, and I’m happy to provide that service. I always say, as I’ve said many times in these kind of situations, if I hurt somebody’s feelings – I’m always sorry about that, I’m not trying to hurt somebody’s feelings. But if you want me to say, ‘I’m sorry what I said was wrong’ – no, sorry I can’t go there.”

Maher said that he does have to play by different rules than all other political commentators on television because he admits, “I have to be funny.” Yet one person who Maher himself finds funny is Trump. Maher revealed that Trump has been telling him for the past eighteen years that he would appear on his show and hasn’t yet. Maher concludes that not only does he not take Trump seriously as a potential candidate for President, but “I don’t take him seriously as a guy who runs casinos.”