Bill Maher On The Factor, Part II: The Two Bills Clash On Religion 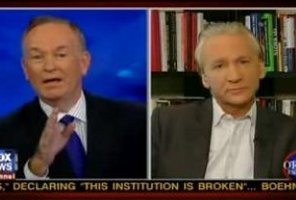 After a pointed but down-to-earth conversation last night, Bill O’Reilly and Bill Maher had a more spirited (and probably more compelling) discussion on religion on tonight’s O’Reilly Factor. The two probably have even more wildly differing views on religion than politics, and they got a bit louder than last night, but like their previous segment, showed a refreshing ability not to descend into complete chaos when they don’t see eye-to-eye.

Not that things didn’t get animated – it was clear things would when O’Reilly teased the segment by saying, “Calling religious people ‘morons.’ That’s what Bill Maher is doing, and we will challenge him.” Even if Maher didn’t quite do that literally, he implied something similar with lines like, “Faith is “the purposeful suspension of critical thinking,” and “If it’s your perfect holy book written by God, why is there stuff in there that makes no sense?”

O’Reilly disputed this point, saying the Bible “is allegorical…designed to teach a greater truth that apparently has eluded you.” A central theme to that greater truth? In O’Reilly’s words, “Don’t call [your neighbor] stupid because they don’t agree with you politically.” He was VERY pleased with himself on this line. Maher, though, got in a pretty good crack of his own when he said, “If Jesus was in charge of the country we’d probably have health care for everybody.”

There were some strikes against both: O’Reilly drastically over-generalized the theory of evolution, and when he said Maher is “not noble” for mocking people of faith, he had a point – it wouldn’t hurt Maher to tone down his anti-organized-religion rhetoric a tad every now and again.

But mostly, this was another entertaining discussion conducted more rationally than many like it. And despite that “not noble” critique, O’Reilly does seem to have a bit of fondness for Maher, saying you “have to give him credit for debating.” Indeed, the last two nights it’s produced some good television. Video of tonight’s segment below.