Bill Maher Panel Investigates: Why Was This Week So Big On Anti-Semitism? 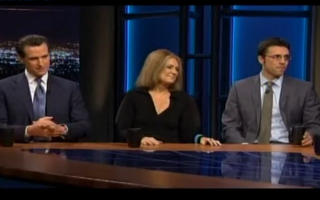 Charlie Sheen. John Galliano. Julian Assange. Muammar Gaddafi. What do all these names have in common in the week that was? Somehow, in one way or another and to varying degrees, they ended up saying something totally offensive about Jewish people. To Bill Maher, it appeared that there was no facet of the news cycle this week in which Jewish people were not maligned, and he put it to his panel to figure out whether there was something in the air.

Unlike many topics in which Maher gives finding an explanation a whirl, this time he left the floor almost fully open to his panel, baffled at the fact that it seems that the one thing that unites people across the world is anti-Semitism. “When you get people talking long enough,” he joked, “What comes out is ‘I don’t like the Jews.'” He seemed particularly confused at anti-Semitism in Libya, where anti-Gaddafi protesters called him a “Jew” as a pejorative and he replied with the same apparent insult.

The Washington Post‘s Ezra Klein had a simple answer: it’s the economy, stupid. He noted “serious economic undertones” in most of the examples Maher gave of anti-Semitism (Sheen’s rampage notwithstanding), though fellow panelist Gloria Steinem added that there were varying types of anti-Semitism and to target what she called “individual anti-Semitism” instead of the “institutional” variety– the kind that makes young children in the Middle East hate Jewish people from the get-go– would be a waste of efforts.

Maher agrees with his panelists but continues somewhat perplexed at the existence of the thread, despite Steinem’s, Klein’s, and San Francisco Mayor Gavin Newsom‘s attempts at figuring it out.