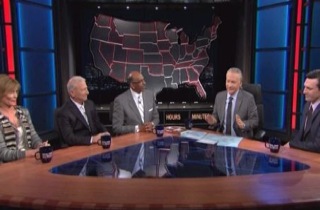 With Tuesday’s Alabama and Mississippi primaries on the horizon, Bill Maher sent filmmaker Alexandra Pelosi to the heart of Mississippi to interview some prospective voters, and what she found was some scary footage– of voters who feared President Obama was a “Muslim” and promising “the South will rise again.” The panel, including Jon Hamm and Michael Steele, analyzed the situation and, after making a few jokes about the subject’s teeth, argued that education was the only solution to their poverty.

With two caveats– that “all these people knew they were going to be on this show and they all think I’m going to Hell” and “we are going to send Alexandra Pelosi to the inner city” in the future– Maher introduced a segment that depicted various Mississippi men (all white men, and no women, despite the state being 51% female and 37% black) complaining about “Adam and Steve,” claiming they hated the government while being on food stamps, and threatening that “the South will rise again.” There was also talk of hating black people and the President for being a “half-breed.”

Maher and Hamm made some jokes about the lack of teeth in the video, though Maher praised their attitude in some respects– “there is something noble about saying ‘we’d rather go hungry than take free money.'” Hamm agreed, adding that the Republican Party is “the party of you’re going to win the lottery and a miracle is going to happen,” which is somewhat improbable to say the least.

Steele defended those hopes, noting that they were natural and American. “No one wakes up in the morning and says, ‘All I want to be today is poor.'” He did find the “South will rise again” rhetoric weird, asking “what the hell does that mean, exactly?” Former SEIU head Andy Stern was actually more aggressive towards Democrats than Republicans, noting that they weren’t offering the sort of viable alternative to people like the ones in the film that would entice them. “Democrats have to figure out how to speak to people, too– there isn’t an alternative, it looks like Tweedle Dee and Tweedle Dum.”

Catherine Crier noted that even Adam Smith had called for a social safety net to guarantee the functioning of capitalism, which led to a discussion on the “trampoline” vs. “net” analogy, and to the ultimate conclusion that public education that works is key to fixing these issues.