Bill Maher: People Don’t Like Romney “Not Because He’s Rich, It’s How He Got Rich’ 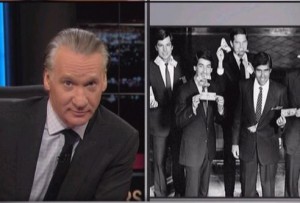 Mitt Romney‘s capitalist ventures have been the subject of much scrutiny of late, and in his final New Rule of the night, Bill Maher piled on, explaining such criticism was not anti-capitalist, but was more of a reaction to how Romney attained his wealth. He compared old photos of Henry Ford, Walt Disney, and Steve Jobs with their early creations to the infamous picture of Romney and his business partners with money pouring out of their suits. Maher joked they appeared to be part of a production of “Snow White and the Seven Fuck-Faces.”

The difference between Romney and the early innovators of his time was that Romney never actually created anything besides money, Maher argued. He suggested that Romney was completely out-of-touch, both because of his answers to questions about issues like income inequality and the fact that the median annual income for an American is around $26 thousand. If Romney wants to be president, Maher said, he would have to promise voters he would fight for a system where it is easier to acquire money. “If you elect him, he’ll tell you the secret!”

Maher then asked what the difference was between Romney publicly celebrating his riches and rap artists bragging about their money on album covers and such.

“People who like Mitt Romney like him for the same reason other people like rappers who endlessly rub it in that their life is so much better than ours. They’re in the hot tub at the after party with the bling and the bitches. And yet, no matter how clear Jay-Z makes it that the hot tub is only for the coolest and most beautiful people, somehow at the end of the song that is us.”

But to most average voters, the choice is clear. “What would you rather do: help poor people or have money in your mouth?”