Bill Maher: Perry’s Gaffe Was Not Forgetting Agencies To Cut, It’s That He Wants To Cut Agencies 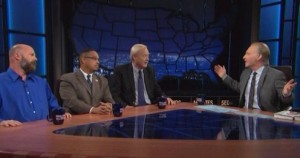 Bill Maher ripped the entire Republican field in his final episode of the 2011 season, sparing no one, from the politically divisive Herman Cain to the self-proclaimed moderate Jon Huntsman, whom Maher had a few surprisingly strong words for. He began the panel discussion by recapping this week’s local election news, from the defeat of Mississippi’s personhood amendment to the union victory in Ohio.

Maher saw these Republican defeats as a sign that voters are starting to see the results of what their legislators set out to do. Andrew Sullivan claimed that it was part of a leftward shift in the American electorate that is being reflected in the latest polls, due to the Republicans moving farther to the right, but Maher disputed that fact, claiming they’ve been on the left all alone. He argued the problem was with the ineffectiveness of the Democratic party, which Sullivan agreed with. Democrat Keith Ellison, naturally, disagreed with this assessment, but did agree that voters were starting to see the effects of Republican policies and were turning away from them.

Maher took the opportunity to transition to the Republican presidential candidates, sharing his exasperation with all the debates that have happened so far and the ones left to go. Chris Matthews brought up Rick Perry‘s now-infamous moment of SHEER AWKWARDNESS at Wednesday’s CNBC debate, and was astounded that Perry was unable to remember the name of an agency he clearly hated.

Sullivan suggested one of the main problems with the current incarnation of the Republican party is how much it basks in the talk radio and political punditry sectors, and criticized Cain for “learning everything he knows from a radio talk show.” Sullivan cited Indiana Governor Mitch Daniels as the kind of Republican whom the party needed more of, at which point Maher brought up Huntsman. The former Utah governor has been heralded as a moderate who has separated himself with the crazier elements of his party, but Maher thought this was an inaccurate depiction of the man’s record.

“Go to his website. He wants to cut taxes, we have too much regulation, he’s getting out of the same clown car as the rest of them. Jon Huntsman can suck my cock.”

Matthews and Sullivan stood up for Huntsman’s record, and Maher admitted Huntsman could get more support in the polls by appealing to voters outside the traditional Republican base because he has very little to lose.

RELATED: George Stephanopoulos To Rick Perry: Did You Fail To Understand The Preparation It Takes To Run For President?