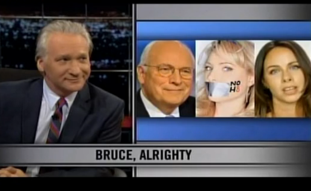 Bill Maher took some time on his program last night to give a “tough love” pep talk to the Democrats– one that often arises mid-conversation with Maher but rarely takes center stage in a segment. Noting that “A Cheney, A McCain, and a Bush” had come out in support of gay marriage, he wondered aloud where President Barack Obama was on the issue, and why the Democrats refused to take hard stances.

Maher began by analyzing the “remarkable progress” in social mores in America, noting that 47% of Americans opposed gay marriage, making those that support it a plurality. He crudely compared the 47% anti-gay marriage statistic to miscegenation– how would Americans feel if a similar number came out opposing the “marriage of a black man to a Kardashian sister”?– and asking what the President was waiting for to make a bold move in favor of gay marriage. “I’d like to congratualte the leadership of the Democratic Party… I’d like to,” he lamented, “but I can’t.”

Maher did go out of his way to thank the Democrats that had come out strongly in favor of gay marraige, those exceptions being former San Francisco mayor and current Lieutenant Governor of California Gavin Newsom, Rep. Dennis Kucinich, and “that governor in New Jersey that went all Brokeback Mountain with his bodyguard [it was actually his foreign-born Secretary of Homeland Security, but sure].” More to the point, the Republicans were as staunch about their beliefs as the Democrats were flimsy about theirs, he argued. “Shoving things down America’s throat is what Republicans do all the time,” he argued. “Republicans don’t run from unpopular stances,” he concluded, then reading a laundry list of pejoratives for those stances.

The segment from last night’s Real Time via HBO below: