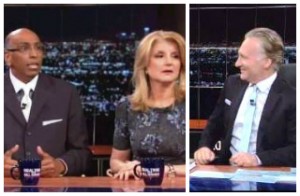 Bill Maher tonight credited Rand Paul for, despite a few gaffes and exaggerated hypotheticals, helping fuel a national conversation on the U.S. drone strike program as a result of his 13-hour filibuster. However, while Maher and panelist Arianna Huffington applauded Paul for his effort, Maher said that like the death penalty, there are bad people in the world who should be taken out by drones if the government decides it is necessary. Maher said, “Some people do need killing.”

Maher first pointed out that Paul’s main concern was drones being used on American soil against U.S. citizens, while ignoring the fact that drones are mostly being used in other countries. Maher summed up this philosophy as “Foreigners? Fuck them,” and criticized Paul for acting like we shouldn’t care about them. Avik Roy jumped in to argue that Maher would probably be on the other side of the argument if George W. Bush was the one ordering drone strikes.

Huffington interrupted to defend Paul, saying that his filibuster was “incredibly important” and managed to break down the “right-left way of looking at politics.” Maher agreed, saying that Paul brought attention to a really important subject that Maher himself has raised in the past. Comedian David Cross said there is a “lack of empathy” among people who do not understand these issues and cannot comprehend the fact that the United States has been at war for years.

Back on the topic of drones, Maher clarified his position to say he thinks they can have some use in modern warfare.

“That’s not to say all drone attacks are bad. You know, some people do need killing. It’s like what I say about the death penalty, let’s just kill the right people.”

Michael Steele said Paul helped bring attention to the same people Cross said cannot fathom war because they do not know about it, adding that President Obama sufficiently answered Paul’s concerns. Huffington said he has not, pointing out that there is a real issue of whether or not it is constitutional for the president to have a kill list or how the government describes “imminent threats.” When she pointed out that drone strikes kill innocent civilians, Maher said that all presidents would probably make the same decision, because, as he surmised, they are all told at the start of their term in office who the bad guys are and how important it is to take them out.