Bill Maher Proposes A Timeshare With The Palestinians To Israeli Ambassador To The U.S. 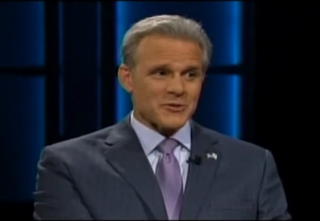 Bill Maher reconfigured his typically panel-led program last night to talk about war, settlements, and religion with the Israeli ambassador to America, Michael Oren. Given Maher’s position on most of those things, the American-born diplomat had a good amount on his plate, including explaining why religion is the key wedge issue of his country and why a timeshare between Israelis and Palestinians may not work.

Despite being a comedian, Maher took the interview seriously, asking direct questions about Israel’s military might and foreign policy. Among the more interesting hypotheticals Maher put out was how Israel would feel no long being the only democracy in the Middle East, if the revolts in northern Africa and American work in Iraq pans out. “We are proud to be a democracy,” Oren answered, “and would be even prouder to be one of many democracies.”

Maher also expressed skepticism about the Israeli government claiming to be withdrawing settlements, comparing the statement to a “Palestinian ceasefire, which is really just another way of saying reloading.” He added to this his complete bafflement with the idea that a religious text or two could be behind centuries of struggle: “these are two Semitic people who, if it wasn’t for these silly ancient texts from ancient desert dwellers have a lot in common and really wouldn’t hate each other.”

Oren noted that both he and the Israeli government wanted to see “a situation where the Palestinians have their own state, justl ike we have our own state,” but that for that to happen, “they have to talk with us.” Since both peoples believed the land to be rightfully theirs, they would have to talk about it and communicate and share it. As to the religious complaint, Oren clarified that Israel is “not a theocracy– we host the International Pride Parade, we’re sending a transsexual singer to Eurovision this year… we are not a theocracy.” And, once again, he concluded emphasizing dialogue. “We have to share it,” he said of the land. “And to share it, we have to talk about it.”

The interview on Real Time via HBO below: