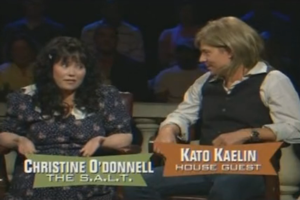 Bill Maher caved on his promise to America that until Republican Senate candidate from Delaware Christine O’Donnell agreed to do his show again, he would show embarrassing clips of her from appearances on his old show, Politically Incorrect. While keeping his audience waiting with bated breath and promising his new clip would “blow your socks off,” he delivered… a parody sketch. Was Maher bluffing about his personal O’Donnell gaffe library last week? Did the soothing presence of Andrew Breitbart give him reason to reconsider?

The answer to both of those questions is probably “no,” as Maher did release a real clip of O’Donnell from the ’90s (calling evolution a “myth,” which will probably only make her more likable to many of her followers), and Breitbart was happy to partake in the making fun of her. Maher has exhibited surprisingly little mean-spiritedness towards O’Donnell throughout the whole deal, insisting that O’Donnell, who he admits he liked to have on the show, is “nice” and could be more successful than Sarah Palin because Sarah Palin is “mean.” Compared to his treatment of many other right-wing figures, he has really put on the baby gloves here.

After giving her a week of fretting and wracking her brain to remember what the worst thing she said on his show was, Maher gave her a break. On a panel with acclaimed ’90s rapper Christopher “Kid” Reid of Kid N’ Play, actress Edie McClurg, and OJ Simpson houseguest Kato Kaelin, O’Donnell managed to outshine them all and terrifying poor “Kid” with her “abstinence” theory, stem cell marketing, and murderous tendencies. It was almost as believable as any of the actual Christine O’Donnell vintage clips which, by the way, Maher did show, but only for about 20 seconds and all she said was that she could not grasp how evolution was not visible to the human eye if it was, indeed, real. This set guest Seth MacFarlane on an explanatory monologue about evolution, which Breitbart followed up with, “But do we really exist?”

Maher also showed off a small Ten Commandments plaque, which he says was given to him by O’Donnell and he keeps in his office to remind him how “stupid” they are. Despite his thorough bashing of the Commandments themselves, he was sentimental about the gift and his friendship with O’Donnell, though MacFarlane theorized that may just be a ruse to get more money for the plaque on eBay.