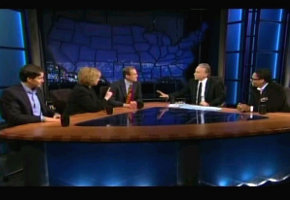 If you’re familiar with Bill Maher, you’ll know he’s always up for a debate on any topic involving religion. In fact, as he showed on tonight’s Real Time, he’s even up for such a debate when the original topic has nothing to do with religion – what started as a debate over climate change turned into a referendum of sorts on evolution, thanks to Maher bringing the topic up out of nowhere.

The main debate was between Maher (who believes climate change is real) and Rep. Jack Kingston (R-GA), a climate change skeptic. Taking Maher’s side on the issue were comedian D.L. Hughley and former Canadian Prime Minister Kim Campbell (Campbell called Kingston’s position “absolute rubbish”), while Will Cain of the National Review was more sympathetic to Kingston, saying he was “agnostic” on the issue. Masher was having none of it, though, saying “the science is settled” on climate change, and then asking Kingston point blank if he believes in evolution.

Long story short: Maher got the answer we imagine he hoped Kingston would give him in hopes he could make him look scientifically illiterate: the congressman indeed doesn’t believe in evolution. Campbell and Cain brought the discussion back on topic until Maher brought up evolution again…and this time, Campbell couldn’t resist chiming in, pointing out that microbes developing resistance to antibiotics is an example of an evolutionary process in action. Even Cain eventually admitted he wasn’t on Kingston’s side in the evolution debate, though Kingston did have one unlikely ally. Video of the back-and-forth segment, via HBO, below.