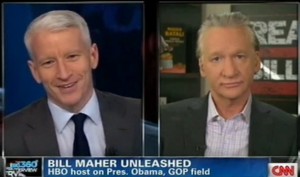 Isn’t domestic violence hilarious? I didn’t think so, either. Apparently, Real Time host Bill Maher does, at least when it happens to women who are part of a breakaway Mormon sect. In an appearance on AC360, Maher told host Anderson Cooper that he believes former Massachusetts Governor Mitt Romney will win the Republican nomination, and that “Obama is going to beat him like a runaway sister wife.”

Assessing the 2012 election, Cooper asked Maher, “You think no matter who the Republican candidates are, you think Obama’s going to win?”

“Oh, definitely,” Maher replied. “I think it’s — my money is still on Mitt Romney. And I think he’s going to get the nomination, and then I think obama is going to beat him like a runaway sister wife, yes, I do.”

Cooper reacted, disappointingly, with a dumbfounded laugh. “Geez. A runaway sister wife? I haven’t heard a FLDS (Fundamentalist Church of Jesus Christ of Latter-Day Saints) punch line in quite awhile.”

Maher is known for being a provocateur, which he seems to think gives him an unlimited supply of mulligans, but this is just the latest in a string of over-the-line remarks, many of them having to do with women. This one is particularly scummy, and like so many of his misfires, devoid of even dark humor.

Also disturbing, to a lesser degree, was the reaction of the conservative blogs that I first saw this clip on, The Blaze and media watchdog Newsbusters. Both were properly outraged, but neither mentioned violence against women. The source of their outrage? Here’s Newsbusters‘ Noel Sheppard, blockquoting The Blaze‘s Billy Hallowell:

Not catching the reference, I Googled “runaway sister wife” and found that Billy Hallowell over at the Blaze had written about this earlier:

[T]here’s a popular television show on TLC called “Sister Wives.” The program, which documents a polygamous family’s lifestyle, is controversial to say the least. Maher’s mention, which is particularly striking considering that polygamy is forbidden by The Church of Jesus Christ of Latter-Day Saints (in fact, the practice would cost one his or her membership in the church), seemed to be a dig at Romney’s faith.

At the very least.

Yes, it’s outrageous because it’s a shot at Romney’s Mormonism. It could be worse. Who knows what they would have said if Maher had used “beat him like a bowl of egg whites,” instead.