Bill Maher: 2nd Amendment Is Not Under Attack, But All Your Other Rights Are
video

Bill Maher: 2nd Amendment Is Not Under Attack, But All Your Other Rights Are 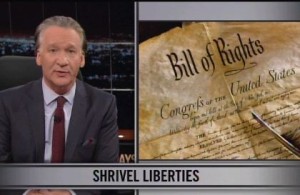 In his final New Rule of the night, Bill Maher smacked down the conventional wisdom on the right that the Second Amendment is under attack from President Obama, saying that “America’s gun nuts” need to stop wetting their pants over it. But more importantly, Maher said that people are so very concerned about their right to own guns that they don’t notice and/or care that they have been stripped of their other rights.

Maher highlighted how the Senate quietly reauthorized the National Defense Authorization Act while everyone was so concerned about the fiscal cliff, and there wasn’t even a peep out of the “freedom” crowd. In fact, Maher said, people seem to be okay with government surveillance and warrantless wiretapping at this point.

Maher also railed against the “Facebook generation” that doesn’t care who knows their personal information, while he is adamant about not wanting the Feds to look at his web searches. He noted that the government always claims such programs are to “catch terrorist,” but the next thing you know they’re shutting down pot dispensaries.

Maher asked, “Does anyone care that this is the new normal?” He said that liberals outraged at George W. Bush for these programs have said nothing about Obama, because “the only thing that still has bipartisan support in Washington is not giving a shit about privacy.”

Maher circled back to the gun advocates, saying that they may have the guns, but they don’t have the rights that their guns are supposed to be protecting.