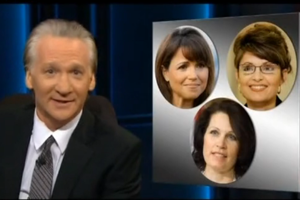 Bill Maher, as nearly everyone that follows the news at this point, has an elaborately thought out opinion on Brett Favre‘s penis. Unlike most comedians that have mocked his sexting scandal but stopped short of commenting beyond that and his insatiable desire to retire over and over, Maher sees it as more of a morality tale: it is not merely Favre who is in trouble, but “white penises,” who “are crying all over America.

As reported over on our sister site Sportsgrid, as far as sports insults go, Maher gets quite a few stingers in. But then there’s an entirely separate facet of his monologue, the political facet, where Maher elaborates on the relationship between naked pictures of Brett Favre and the women of the Tea Party. Yes, there is a relationship but, no, it’s not scandalous. It’s merely metaphorical– Favre, the white man that has controlled and colonized and raped and pillaged for so many years, longing for the stereotype of the “dumb housewife” that, as time passes, becomes increasingly more elusive. Enter Sarah Palin, Michele Bachmann, Christine O’Donnell et al, and their appeal to the male psyche in that state seems insatiable, he argues. The story of Brett Favre is “about how pathetic and clueless white American males have become, he explains. “Because the kind of guy who thinks there are women out there who just cold want to see your cock is the same kind of guy who thinks Sarah Palin is swell and tax cuts pay for themselves.”

The Tea Party, he continues, is a fabrication of men like Brett Favre, who find that white Americans are on the road to becoming a minority and would like to “restore” the country. “If penises could cry,” he declares dramatically, “and I believe they can, white penises are crying all over America.” To soothe them, Republicans have deployed “the lovely MILFs of the new right,” he says, as a graphic of Palin, Bachmann, and O’Donnell appears. It is Brett Favre’s fault that these women are in positions of political power.

That’s quite the argument, and a bit of a stretch, though by far the funniest part of this segment is that, sitting next to Maher and off-camera, is Dana Loesch, editor-in-chief of Big Government and officially the hottest conservative new media lady according to Right Wing News. How awkward must this monologue have been for her?