Bill Maher On GOP: They Are All Like The Banks – They Won’t Give A Black Man Credit 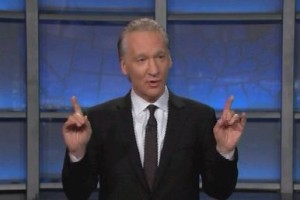 Bill Maher opened tonight’s Real Time by dedicating much of his monologue to calling out Republicans for not giving President Obama credit for helping kill Muammar Gaddafi. “They’re like the banks, they will not give a black man credit!” Maher zinged.

Maher’s audience greeted the start of the program with raucous applause. “For a liberal crowd, you get all fired up when we kill an Arab!” exclaimed Maher. “Our badass black ninja president did it again. Don’t fuck with this guy!”

Maher tabulated the laundry list of “bad guys” that Obama has brought down.

“So far this year he’s killed Somali pirates, he killed Bin Laden, he killed al-Awlaki, now he killed Gadaffi, our only threat to our way of life now is from Bank of America,” Maher joked.

Maher lamented the fact that even with that formidable body count, Republicans still would not give credit where credit was due.

“They gave credit to the rebels! And to the British! And to the French! But they would not mention the president. It’s like they were on a game show and the password was ‘Obama'”

“In their world, Gaddafi died of natural causes, Bin Laden was shot in the face by the free market,” Maher fussed. “You should’ve heard them, we went in too strong, everything they could’ve said that he did wrong. It’s like there’s some kind of hidden Republican clitoris, that they won’t let Obama find, and whenever he tries, they’re like ‘that’s not it!'”

Watch the segment from Real Time below via HBO: