Bill Maher Slams ‘Warmongers’ Itching To Go To War With North Korea: We Need To Start Defining ‘Peace As Strength’ 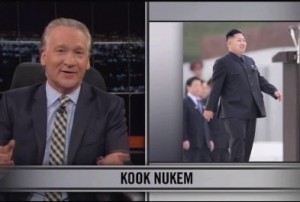 Bill Maher closed out his show tonight with a New Rule railing against the U.S. military-industrial complex for being so eager for a possible war with North Korea. Maher mocked the Korean leader as “Kim Jong Pugsley” and said he’s not really worried about North Korea targeting the U.S., but the war-hungry masses just itching to get into another war are a problem. Maher said that the U.S. has been at war for an insanely long percentage of its existence, and that it’s time to start defining “peace as strength.”

Maher said that people are just looking for “any excuse to ramp up the war machine again,” because if the United States ever ends up not being involved in any war anywhere in the world, the country may start thinking about things like poverty and infrastructure, and “that’s no fucking fun.”

Maher likened going to war with the United States to getting drunk with Lindsay Lohan: we’re already in the car, so let’s go! Maher rattled off a list of wars the U.S. has been in just in the last few decades, acknowledging that while some of them were necessary, the U.S. needs to “look in the mirror and say, ‘maybe it’s me.'” He said that the war-hungry mentality needs to be replaced with promoting the idea of “peace as strength.”

Maher cited Jimmy Carter as a role model in that regard, and Dick Cheney as the complete opposite of that. He also ended his New Rule by explaining that Hillary Clinton lost in 2008 because she voted for the Iraq War and stood by it, because “what good is being the first female president if you have to be a dick?”