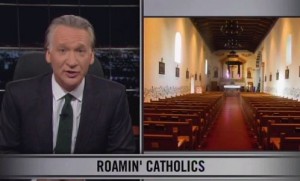 Bill Maher had a lot to say tonight about the surprise resignation of Pope Benedict XVI and the Catholic Church in general. Maher told Catholics that “if the Pope can quit, it’s okay for you to quit too,” and argued that institutions that discriminate against or leave out women are bound to descend into “sexual deviancy,” hence his declaration that it’s time for the College of Cardinals to select a female Pope.

RELATED: Matthews Hopes New Pope Reforms Church: ‘We Got Meat On Fridays, We Would Have Rather Had Birth Control’

Maher joked that the Pope left because the church wants a fresh face “somewhere other than a priest’s lap.” He argued that the institution of the Catholic Church is “dying off,” like Blockbuster and moderate Republicans. The Pope, Maher guessed, may have realized he’s no more than “Queen Elizabeth in a better dress” and said he’s “too old for this shit.”

Maher posed a question to the Catholic community: “if you’re Catholic but don’t follow anything the Church says, what are you staying for?” He told them “it’s okay to let go,” while questioning why anyone would want to belong to an organization that discriminates so blatantly against women. Maher suggested that any enterprise that excludes women descends into “sexual deviancy,” because from the Boy Scouts to Penn State to Wall Street, “a bunch of innocent folks [will] get fucked.”

Maher decided that the church needs a female Pope, offering up both Hillary Clinton and Oprah Winfrey as possible contenders. But failing that, Maher offered up himself as a contender, explaining that he was raised Catholic, has “no interest in children whatsoever,” and comes with his own “white puff of smoke.”